Strength, Vulnerability and the Actor 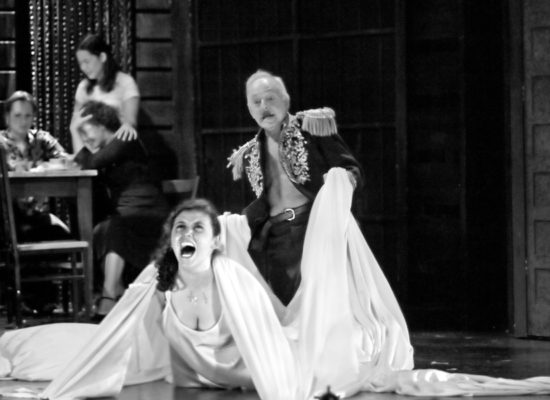 Many actors who train in a Stanislavski or Strasberg based approach devote much of their energy toward achieving highly vulnerable emotional states. I have even encountered students whose primary training objective is to be able to cry on cue. For a long time I would tell students that this was not the most important thing in the work. After several years, however, I realized that nothing I said could prevent some students from obsessing about it to the point where they staked their entire self-worth as actors on whether or not they could cry hysterically on a regular basis.

So now I encourage those students to attain their emotional explosions as early as possible, so that they can move on to other aspects of the work.

After the actor has been able to create states of high emotion for a while, the actor then tends to overuse high emotion in the scene work. This is, of course, to be expected, as one naturally wants to practice a new skill, even to the point of indulgence. Typically, the actor will cry, or even writhe around on the floor, not be able to speak much, and end up in a wet, pathetic ball in the corner of the stage. Other student actors are impressed. Often, the instructor is impressed. The audience is not.

Before I continue, I must explain that I have absolutely nothing against the exhibition of high emotion on the stage or on film. I have done it often myself and directed other actors toward it countless times. With some exceptions, however, these intense emotional displays must be combined with some aspect of strength in the character’s spirit to be effective.

What is strength? There are a hundred variations. Popular culture promotes the idea that strength is cold, unyielding, insensitive, muscle-bound, brutal, even deadly. This is an incredibly simplistic idea of strength. Strength of the spirit involves true courage under difficult circumstances. If a macho movie hero is built like an armored tank and has five black belts and advanced expertise in the latest military hardware, it doesn’t take much to prove he can pulverize his opponents. Superman is only vulnerable to Kryponite! For a normal human being to fight back against pain, grief, intolerance and the sense of having the odds stacked against them demands a challenging strength of spirit.

That human being’s strength means little if they are not simultaneously emotionally vulnerable to these challenges. The true hero or heroine fights on despite their tears. In fact, they use their emotion to fuel the courage to take action, to defy their enemies or their fate.

In acting terms, this means that actors must train their instruments to speak through the emotion, to move the body towards action, to breathe through the intensity of feeling (just as a trained athlete “breathes through the pain”). The emotion should not knock you out of the fight, at least not for more than five or ten seconds. Ten seconds of complete emotional surrender is about the limit of what the audience will put up with before becoming annoyed at the actor’s weakness and self-indulgence.  They empathize with the emotional devastation, they are impressed by the acting skills, but then they want to see you get off the floor swinging! Are their exceptions? Of course. Certain characters, usually supporting, contribute to the plot or the theme by appearing to be completely victimized. These characters exist mainly to spur the main character into action.

You can play the great roles only if you can compellingly integrate the principles of strength and vulnerability. Antigone speaks and struggles through her tears. Othello and Lear fight and roar like wounded lions even after the full impact of their self-delusions have hit them.

Nora feverishly dances the Tarantella at the height of her anxiety and torment. Paulina rages at Leontes through a thunderstorm of grief and tears on the seeming death of Hermione.

Drench the stage, the audience, the whole theater with your tears if you like. As long as you do it with all the strength of your spirit.